In April 1918, the United States formally entered World War I, joining the nations of Europe in their struggle against the Axis powers. Young men and women rushed to answer the call to serve their nation, as the government prepared to send them overseas to fight and serve as nurses. For those being sent to the front, and for their loved ones staying at home, the separation imposed upon the soldiers and nurses and their friends and family was surely daunting. To help cope with the separation and the anxiety produced by war, letters exchanged between those on the front lines and those at home provided assurance and a sense of normalcy during the war, while after the war, these same letters embodied wartime memories.

The content of letters from the front varies widely, but a common theme running through many letters is that of offering the loved ones a sense of assurance that those at the front were well and happy. For example, Nora Saltonstall, who served as a nurse during the war, did tell her family of her work experiences, but she also wrote cautiously as a consequence of the censorship of letters, and “because she did not want her worried father to insist that she come home.” Likewise, Corporal Anthony Dicello wrote a letter to “Frank” in 1918 with the express purpose of informing Frank that “I am well,” even though he had recently been wounded. Dicello requested that Frank keep the information about his wound from his parents’ knowledge, but then quickly offered Frank additional assurance in the closing lines: “Being in hospital is just like being at home. We sure do get treated fine.”

Nevertheless, not all soldiers were as stoic as Dicello. In a letter to his mother dated January 30, 1919, Charles Stanley Lamb apologized for having distressed her in a former letter. He continued, “I’m afraid my letters have been a bit gloomy and as I look back at my[?] experiences I now see no reason for my giving you the details I did. It was apart of my trouble that the effort to appear bright and cheery was beyond my strength.” Although Lamb expressed additional frustrations in the rest of the letter, he also assured his worried mother that time on leave had refreshed him.

Just as letters from the front gave those at home assurance of their loved ones’ well-being, those on the front lines eagerly waited for assurance and normalcy in letters from home. Receiving letters from home connected the men and women at the front with the reality of home life and assured them that their waiting families had not forgotten them and still loved them. Unfortunately, though, letters from home frequently took weeks to reach those at the front, and they were often destroyed after being read because of security matters. Nevertheless, soldiers and nurses longed for news from home, as expressed by Pvt. Harry C. Williams, when he wrote, “Uncle Sam has quite a big problem in delivering letters here in France so we are all thankful to receive them no matter how old they are for it really is our chief pleasure to get news from back home in the good old USA.” John A. McGill’s letters to his mother, though somewhat terse, also reveal a similar desire for news from home. In his letter dated June 23, 1918, he asked his mother to “Tell Laura I would like to see the baby. Write me all the news.”

Private James Henschel wrote to his parents about placing their pictures in a photo book they had previously sent, followed by the injunction, “so you must not stop sending them [pictures]. Nothing is more welcome — except the letters themselves.” 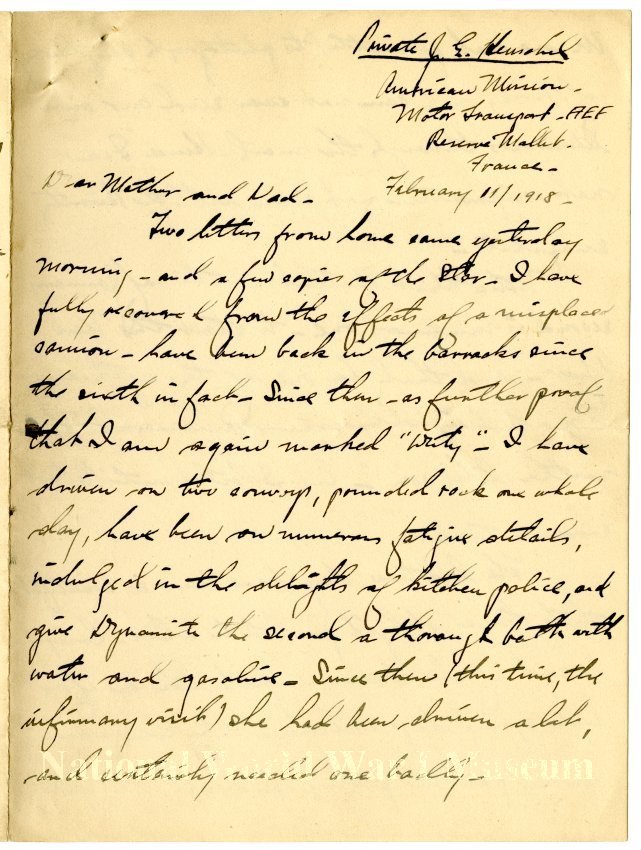 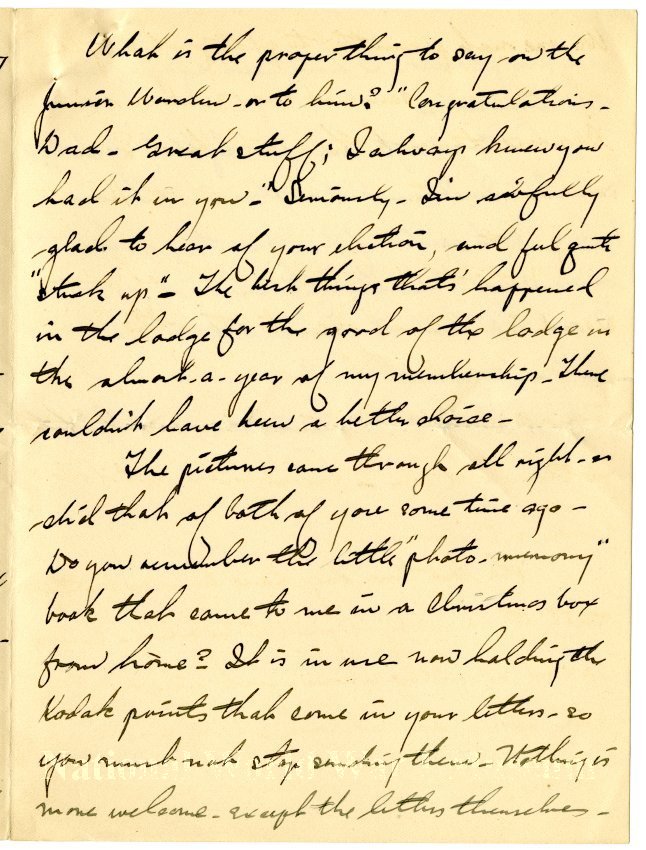 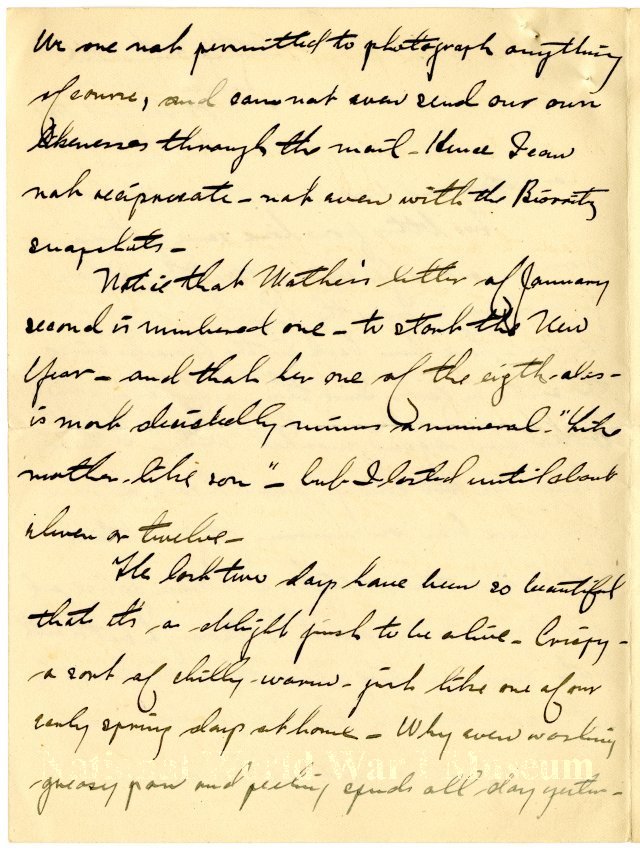 Just as news from home and photographs assured soldiers and nurses of their families’ affection and maintained a sense of normalcy, the letters soldiers and nurses wrote home also tried to maintain this sense of normalcy. Oftentimes, censorship of letters meant that soldiers could write very little about the war, requiring that family members try “to read between the lines.” Some soldiers, however, were able to get information past the censors, thereby trying to maintain normal family relationships of openly sharing news. The sailor Conrad Ostroot described “antisubmarine tactics” in one of his letters, which “somehow got through military censors.” However, many soldiers, like Harry Ralston, who later married the lady he wrote to during the war, knew that those tasked with censoring the letters would first read the communications, and thus a degree of propriety guided Ralston’s sentiments. Even though soldiers had to be cautious because of censorship, some tried to maintain a sense of normalcy by focusing on matters of daily life. William Beans’s letter to his mother and wife, written while he was still stateside in December of 1917, is a perfect example of how soldiers frequently wrote about “normal” topics, like food.

Upon the war’s conclusion, the precious letters that bridged the divide between the front lines and the home front became a way of preserving memories of the war. With many of theses letters now carefully preserved in collections, they are a rich resource for historians writing on the war. Memories were also preserved through postcards, which soldiers sometimes used instead of letters for a quicker means of communication. These postcards are valuable not only for the sentiments contained in them, but also for the photographs, which visually document the memories of wartime experiences. 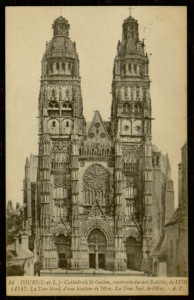 Now preserved in archives and, in some instances, digital collections, postcards and letters exchanged between the home front and the front lines demonstrate that soldiers, nurses, and their families wrote to each other for a sense of assurance and normalcy. These same documents are now a wealth of memories, which can bring the war to life for historians and descendants of the letters’ authors.