To the average World War I American, newspapers were the Twitter, Tumblr, Instagram, and Buzzfeed of Americans today. Newspapers offered a way for people to access, escape, and later remember the events of the war. There are, of course, still newspapers in circulation today, but we don’t depend on them to stay connected and up to date in the same way Americans in the 20th Century did. For the average American reader during the WWI era, newspapers were the best and most reliable option for up to date information. And, although nothing was completely safe from factual error and they didn’t have much choice in terms of how they got their news, many people saw their newspapers as being the most trustworthy way to stay informed.

Other options for news were few and far between but could include the likes of newsreels, word of mouth, and letters from loved ones (once America joined the war.) However, newsreels did tend to focus less on the news aspect of day to day life and erred toward entertainment rather than serious reporting in the 20th century. Although on a few occasions British newsreels during the pre-war era did show the christening of a few of their ships that would see combat, it wasn’t an avenue for journalism and reporting yet. The roll that newsreels did play seemed was as a popular way to disperse propaganda. This often left the newspapers reigning supreme as the best and most reliable source for news on the happenings of the world, war, and war effort.

Another aspect of print journalism at the time that gave newspapers and their editors an edge was the fact that papers had the advantage of being  some of the first  to get ‘hot off the press’ type news. Other sources either weren’t available yet or took longer to reach people. For example, waiting for word of mouth to circulate was both tedious and likely inaccurate, and waiting on mail could be slow; thus, newspapers were most frequent – producing at least one edition a day. Many newspapers however also had both a morning and evening edition, meaning those who had papers delivered or bought both editions were able to get a double dose of news for the day.  When headlines like those below came rolling in, they would likely hear some additional news later in the day rather than have to wait until the next morning. 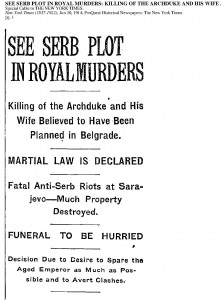 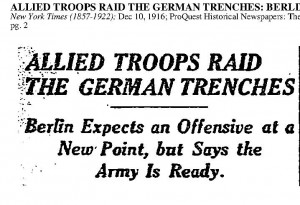 And, as much as the war seemed to take over the papers, they didn’t stop producing other content, either. Even with the war going on, even the most seemingly mundane topics made their way into the papers. Like the Kaiser’s horoscope and the YMCA ad encouraging women to learn how to fly, there were articles on a discussion of daylight savings time, using more of the metric system in our dealings with countries abroad, and ads discussing the latest ball. I found it to be quite easy to get swept up in the idea that war was all the newspapers talked about, but really, there were plenty of articles that discussed topics that were completely normal, and these likely offered people a reprieve from all the war-centric news.

And, for those who are curious, a copy of a paper like the New York Times (where these headlines came from) would have cost  buyer two cents per issue. After doing a little math to account for inflation, two cents in 1914 would equal 48 cents in 2015 whereas at the end of the war in 1918, two cents would equal 32 cents by today’s rates. There were also roughly at least 72 (73 including the NYT) different papers being published in the 20th century*. Besides my own rough estimate, there wasn’t a concrete guess at how many papers were in publication and circulation in the 20th Century. Many of those 72 papers were small town type papers as well.

Newspapers surprisingly had a life outside of the civilian realm, too. Soldiers of World War I were their authors. It was a practice that was more prevalent for European soldiers, particularly French and German troops, as they spent more time on the front lines and away from home than American soldiers did. The purpose of these papers was to give the soldiers an outlet in a time where there wasn’t one otherwise. Topics covered everything from picking fun at their jobs in the trenches and the absurdity of their day to day life in between days of fighting to humor and women. Though interestingly enough, many of the papers didn’t sling mud at their enemies, often attributing humor to them or not at all. The American version of this genre of newspapers was titled The Stars and Stripes. It only ran as it is featured here from 1918-1919, but it looked like this:

and offered advice for it’s soldiers with wit and humor…

Even after the war had ended in 1918 newspapers would still find a way to play a part. They found a like home in the scrapbooks of soldiers and nurses who had been abroad and of citizens who had stayed home. Although each scrapbook and its memories are individual and special to the person who made it, the one item that regularly seems to appear universally at least once in these scrapbooks is newspaper clippings. I have emphasized headlines as my pictorial evidence in this article for the sake of space and physical article length. But in a scrapbook, clippings could range many different topics and have many shapes and sizes. Take these images below for example. One is long enough to hang off the page and discusses naval intrigue while the other is neatly folded up and mentions the loss of the Frye for the Germans along with other topics. Newspapers offered a multifaceted approach to World War I for those who read them. 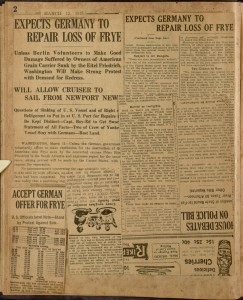 Newspapers played a vital role in allowing people to commemorate important events during the war, both broadly and personally. Helping to illustrate and pinpoint events both big and small with tangible evidence, allowed people to give context to personal letters along with other important life events that might have sat side by side in the same scrapbook. And although the idea of scrapbooking and commemorating life stories in this way wasn’t new, newspapers were able to serve a number of  purposes throughout the war (and after) in allowing people to relate to, escape from, and then remember the war on their own terms and in their own way.

Scrapbook of Einer Smestad (A WWI US Infantryman)

The Guardian, “How the newspapers covered the outbreak of the first world war,” The Guardian, August 4, 2014, http://www.theguardian.com/world/2014/aug/04/firstworldwar-national-newspapers.