Alma A. Clarke was passionate about children’s welfare. As a volunteer nurse working on behalf of the American Red Cross and partnering with the The Franco-American Committee for the Protection of the Children of the Frontier, a wartime relief agency dedicated to helping orphaned/single caregiver children from devastated areas, Clarke did everything she could to assist her adopted country. Clarke played an integral role in caring for children at the largest “orphans’ colony,” the Colony Franco-Americain du Chateau de la Coeur at Cheille, Indre-et-Loire. Her care and consideration was evident from the dozens of scrapbook images of orphanages and the enormous Child Welfare Exposition, held in Lyons, France in 1918. Many of these images are shown within the map below.

The Franco-American Committee’s official report demonstrates the amazing work the organization accomplished in rehabilitating children’s lives. Children were evacuated from hideously devastated areas like the Somme, Lille, Presles, Aisne, Charleville, Ypres, and Poperinge by “camion” truck and transported to railroad depots such as the Gare du Nord and Gare d’Orsay. From that point, they were housed in locations like Touraine and Tarn. The Franco-American Committee sometimes wrote about individual children’s experiences in their report. They stated about the general welfare of the children:

“They are all frightened and homeless, many of them ill from shock and exposure. One little boy of 3 was so shattered that he did not speak for three months after his arrival; but in most cases a few weeks restored the confidence of the child.”

Therefore, simply being transported to the countryside and and receiving proper care benefited many children. Research indicated that the orphanages were spread out throughout multiple destinations, most of which were either in Paris or in rural areas east of the Front. The farthest destination was Lacaune-Les-Bains, Tarn, which is at the extreme Southern tip of France and is mentioned in Clarke’s scrapbook as a destination the Gare d’Orsay photo.  Many of the Franco-American Committee’s orphanages were Catholic charities run by nuns and priests (described in the Franco-American Committee report as an “alliance with Sisters and Fathers”). This is also evident from many of Clarke’s photos which show Sisters of Charity caring for the children. At the orphanages and colonies, children lived comfortably and were taught a rigorous curriculum, consisting of domestic skills like lacemaking for girls, and carpentry, cobbling, and agricultural training for boys.

While little background information could be obtained about the children following the war, it is clear that without the remarkable work of these relief organizations and volunteers like Alma A. Clarke, many children would have perished or led bitterly scarred lives. This map in 3 parts documents the relief committees’ legacies, shows the 3,000 miles it took for relief workers like Clarke to travel from the agency’s New York headquarters to France, and most importantly, demonstrates the impact of the war on France and Belgium’s children.

Please zoom in to view individual locations and layers on the map. 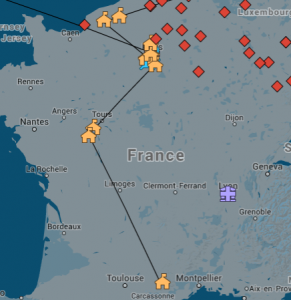 The beige colored school building icons represent orphanages where children were housed under supervision of the American Red Cross or the Franco-American Committee for the Children of the Frontier. Most of the orphanage names are listed in Clarke’s French scrapbook. If you click on the icons of orphanages, you may view pictures of the orphans’ colonies and the children who were housed there.

Also included in this layer are two train stations, the Gare du Nord and Gare d’Orsay, showing routes of children’s travel from the scrapbook. The most important element of this layer is the locations from France and Belgium where children were rescued, represented by the yellow child icons which were mentioned either in Clarke’s scrapbook, or the Franco-American Committee report. A line on the map reflects the travel patterns of some of the children and their routes from the railroad stations to the orphanages. Unfortunately, exact and complete numbers on how many children were evacuated could not be located, but the Franco-American Committee estimated that by December 1, 1917, 1,365 children were in their care and it can be surmised that these masses of children traveled along several routes to reach their new temporary homes. 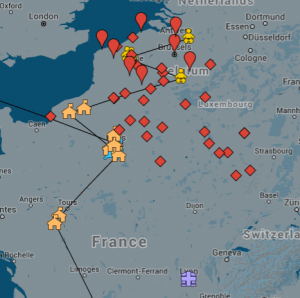 The second layer (red standard map markers and diamonds) is simply a grouping of cities which comprised the French/Belgian front in WWI. The cities were gathered from a standard map  of the WWI Western Front. The red markers tell a dramatic story of where the children were in relation to the war, and the accompanying pictures show how scarred the land was in the areas in which children had lived. One can see by the juxtaposition of the war markers and the children markers that the war did  indeed surround them. 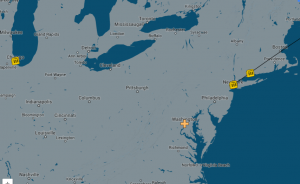 This layer features markers of the Franco-American Committee and Red Cross’ respective Headquarters which were located in New York and Washington, D.C.  (cross icons). It also shows newspaper headquarters from Yale to Chicago (newspaper icons). The line from Paris to New York provides a visual representation of the lengths relief workers like Clarke went to and the distance they traveled in order to help French and Belgian children.

The primary sources for the map were Clarke’s images of children in the France in WWI scrapbook. Her handwriting from letters and postcards and and photo captions were transcribed in an attempt to determine locations, although many areas could not be exactly determined and finding the orphanage buildings, with the exception of the Child Welfare Exposition, proved to be impossible. The Till I’ve Done All That I Can website on the Exposition, the Yale and Chicago Tribune articles, and the Franco-American Committee’s records, mainly located on archive.org were useful for determining historical context.

The map was organized according to a format which demonstrates the vast reach of the war and the distance children (and relief workers) traveled to be spared from the war’s worst devastation. Clarke and the broad network of relief workers, committee members,  religious charities, and concerned French and Belgian citizens truly went the distance to ensure that children would feel the care and support which extended from thousands of miles away.

John T. McCutcheon, “The Franco-American Committee for the Protection of the Frontier Children,” Chicago Tribune,November 4, 1915, http://archives.chicagotribune.com/1915/11/04/page/13/article/franco-american-committee-for-protection-of-the-frontier-children